I always like to try new recipes and dishes around the holidays.  For me they get boring always having the same main course and sides – especially Thanksgiving.  I’m not a huge fan of turkey to begin with so a turkey feast for Thanksgiving never really thrills me.  Then its the same old sides – mashed potatoes, string bean casserole, cranberry, stuffing, etc.  You get the picture.

Over the past few years my in-laws have hosted Thanksgiving dinner and made the turkey, stuffing, and gravy.  I usually do all of the sides.  I try to vary it up a little bit with different vegetables from year to year, but we pretty much keep things consistent.

This year I wanted to try something different but couldn’t think of anything.  I happened to be watching Food Network (what a shock!), specifically an episode of Ina Garten’s The Barefoot Contessa and she made these amazing roasted stuffed pears.  I just had to try them!!!

They were a huge hit and absolutely delicious.  I made the original Barefoot Contessa version which contains blue cheese, but my husband doesn’t like blue cheese.  So, I made another version using goat cheese and it was just as delicious!  Not as strong, but still delicious!

The salty, creaminess, and pungence of the blue cheese paired with the richness of port wine and the sweetness of the pears is unique and delicious!  It’s a perfect Fall and Harvest dish! 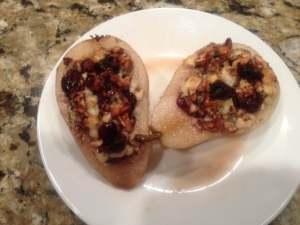 1)  Preheat the oven to 375 degrees F.
2)  Peel the pears and slice them lengthwise into halves. With a small sharp paring knife and a melon baller, remove the core and seeds from each pear, leaving a round well for the filling.  Trim a small slice away from the rounded sides of each pear half so that they will sit in the baking dish without wobbling.  Toss the pears with some lemon juice to prevent them from turning brown.  Arrange them, core side up, in a baking dish large enough to hold the pears snugly.
3)  Gently toss the crumbled blue cheese, dried cranberries, and walnuts together in a small bowl.  Divide the mixture among the pears, mounding it on top of the indentation.
4)  In the same small bowl, combine the apple cider, port, and brown sugar, stirring to dissolve the sugar.  Pour the mixture over and around the pears. Bake the pears, basting occasionally with the cider mixture, for 30 minutes, or until tender.  Allow to cool and serve on a bed of arugula if desired.  I just served mine warm as a side dish.

This site uses Akismet to reduce spam. Learn how your comment data is processed.

A Symphony in the Kitchen

A Symphony in the Kitchen